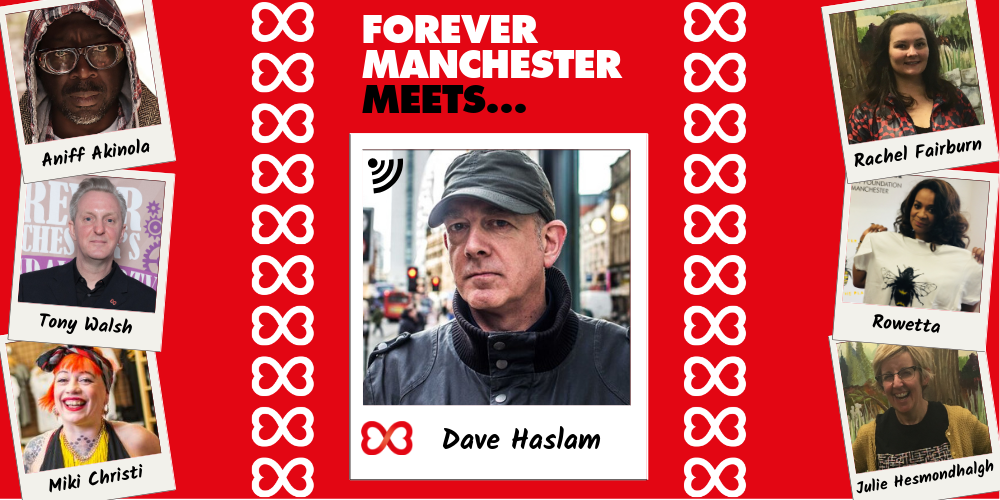 Listen to Dave discuss what brought him to Manchester, his love of music and the Manchester scene as well as sharing his memories of legendary clubs such as The Boardwalk and The Hacienda.  Dave also guides us through his love of English writing and the variety of projects he’s been involved with during his years as a Manchester Icon.

DJ and writer Dave Haslam DJ’d over 450 times at Manchester’s legendary Hacienda during the late 1980s. Since the early 1990s he has hosted a variety of successful club nights in Manchester, including ‘Yellow’ at the Boardwalk, in the same building that Forever Manchester now resides.

He is also the author of ‘Manchester England’, the groundbreaking study of Manchester’s radical and musical history. He’s subsequently written a number of books; an alternative history of the 1970s (‘Not Abba’) and ‘Adventures on the Wheels of Steel’, and ‘Life After Dark: A History of British Nightclubs & Music Venues’. His latest book was published in May 2018. ‘Sonic Youth Slept on My Floor; Music, Manchester & More’ is a glorious well-written memoir of his life and work in some of the most interesting corners of contemporary culture.

His most recent close up interview was with Buzzcock’s lead singer Pete Shelley on 10th June at Gorilla in Manchester, which Forever Manchester was delighted to support the live streaming in partnership with Manchester Digital Music Archive. The event also helped raise £500 for FM in the auction of signed artwork.