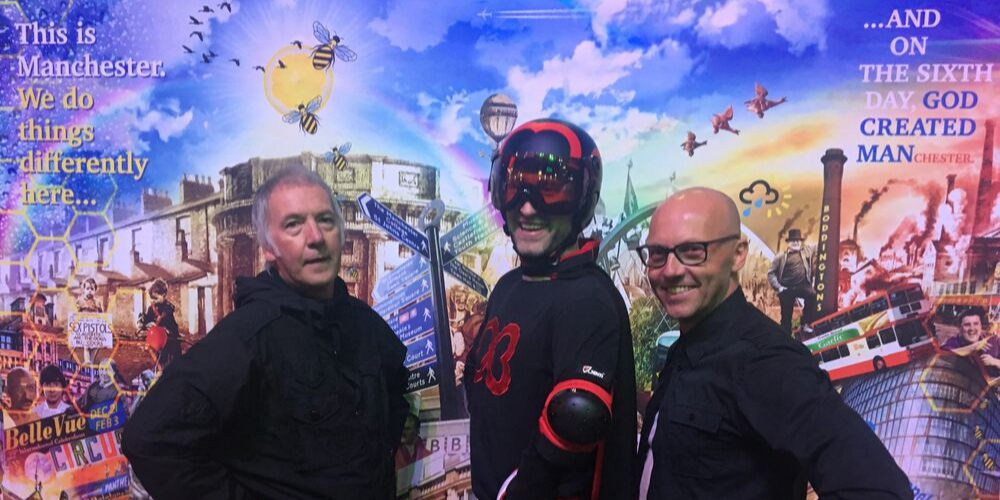 A Manchester Mural celebrating the city’s rich and vibrant history, created by artist Justin Eagleton for the Printworks, has raised £3,500 for Forever Manchester.

The mural, highlighting Manchester’s diverse heritage and celebrating the people and places that make the city what it is, has been on permanent display at the Printworks on Dantzic Street since 21st October 2019.

Captain Manchester joined Clint Boon and Justin for the unveiling at the Printworks and a limited number of prints were put on sale at ForeverManchesterShop.com raising a magnificent £3,500 for Forever Manchester to fund and support community activity across Greater Manchester.

Justin has a huge passion for his home city and this mural contains many of his personal memories whilst growing up there. From music, sport and cultural references to groundbreaking achievement he encompasses all aspects of life and the many people and places that have contributed to its rich history in this unique visual celebration.

Printworks has been long-standing supporter of Forever Manchester for many years, helping to raise a significant amount of money for the charity.

Artist Justin Eagleton explained, “Printworks is an iconic venue in the heart of the city and the perfect place to feature a mural celebrating all things Manchester. This city means so much to so many and I hope everyone will be able to relate to an image, or see something that makes them smile within the mural. I’d like to thank Printworks for allowing me to create this wonderful piece of nostalgia for the city to enjoy.”

We’d like to say a huge thank you to Printworks, Justin and the four incredible photographers who have been so helpful and gracious in opening up their archives to Justin’s creativity and collaborating with him on this iconic Manchester mural, giving exclusive permission for them to be sold to raise money for Forever Manchester.