For Donations
For Fundraising
For Funding & Support
For More About Us 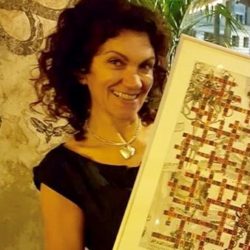 Alison moved from Cornwall to Manchester back in 1985 studying fashion and textiles, but it was the music scene that drew her to the city.

“I’d always been a fan of live music and clubs and used to spend my early days in Manchester hanging out a lot in Piccadilly Records, Eastern Bloc and Vinyl Exchange, where I met so many fantastic people – same with The Boardwalk, The Hacienda and Paradise Factory.

Alison now freelances under the name Clear as A Bell PR as well as for Liam Walsh at Ask Me PR. Aside from this, she organises celebrity in-conversation events, book launches and exhibitions.

More recently Alison returned to her artist roots and started designing name-chains which are themed collections of names, woven together, hand drawn and coloured in a crossword/scrabble-style. The first set of designs all had a Manchester theme.

When Alison was brought in as a Forever Manchester ambassador recently was asked to create a name-chains design with the theme of Manchester venues and iconic buildings to turn into prints and t-shirts.

Alison told us: “I’m looking forward to the opportunity of creating this new design to raise money for Forever Manchester and I’m thrilled that people can get involved with their own personal suggestions of venues and buildings.”

She added: “I love Manchester’s culture and heritage – we’re spoilt. We’ve got HOME, The Lowry, The Royal Exchange, Bridgewater Hall – as well as the new Factory being built for 2020 – plus all the incredible range of museums, art galleries and libraries. Not forgetting the football! I can’t imagine living anywhere else, to be honest.”